The world of a professional-level athlete can be a crazy one. With all of the fame and money comes a lot of risks, options, and even, dare we say, pressure to be at the forefront of fashion. Whether it comes to cars, clothes, and, most importantly, timepieces, professional athletes are ultimately classed as trendsetters in just about everything they can possibly dabble in.

So, as a result of that expectation, it is interesting to dive into what timepieces athletes prefer and wear actually wear in their day-to-day lives. Sure, some athletes are sponsored by certain watchmakers, but for those that aren’t, they have the world of horology at their feet, so let’s explore what they want to wear.

Starting off with one of the only entry-level watches on this list, we have the Rolex Oyster Perpetual. Released in 2020 as an entirely updated collection, the Oyster Perpetual has quickly gone from being a somewhat unappreciated timepiece to one of Rolex’s most sought-after offerings.

With its new automatic cal. 3230 movement, a larger 41mm stainless steel construction, and a slew of pastel color dial options, the collection was an immediate hit.

With certain dial options nearly impossible to find at retail, some athletes have opted to wear the Oyster Perpetual as a means of demonstrating that while their budget isn’t an issue for them, sometimes they are happy to wear timepieces that are within the financial reach of plenty of normal people, so long as you can actually get the watch.

As such, basketballer Lebron James has been spotted on several occasions wearing his Coral Red Oyster Perpetual ref. 124300, as has Roger Federer and plenty of other famous athletes.

Horus Rolex rubber strap is a perfect fit to this watch. 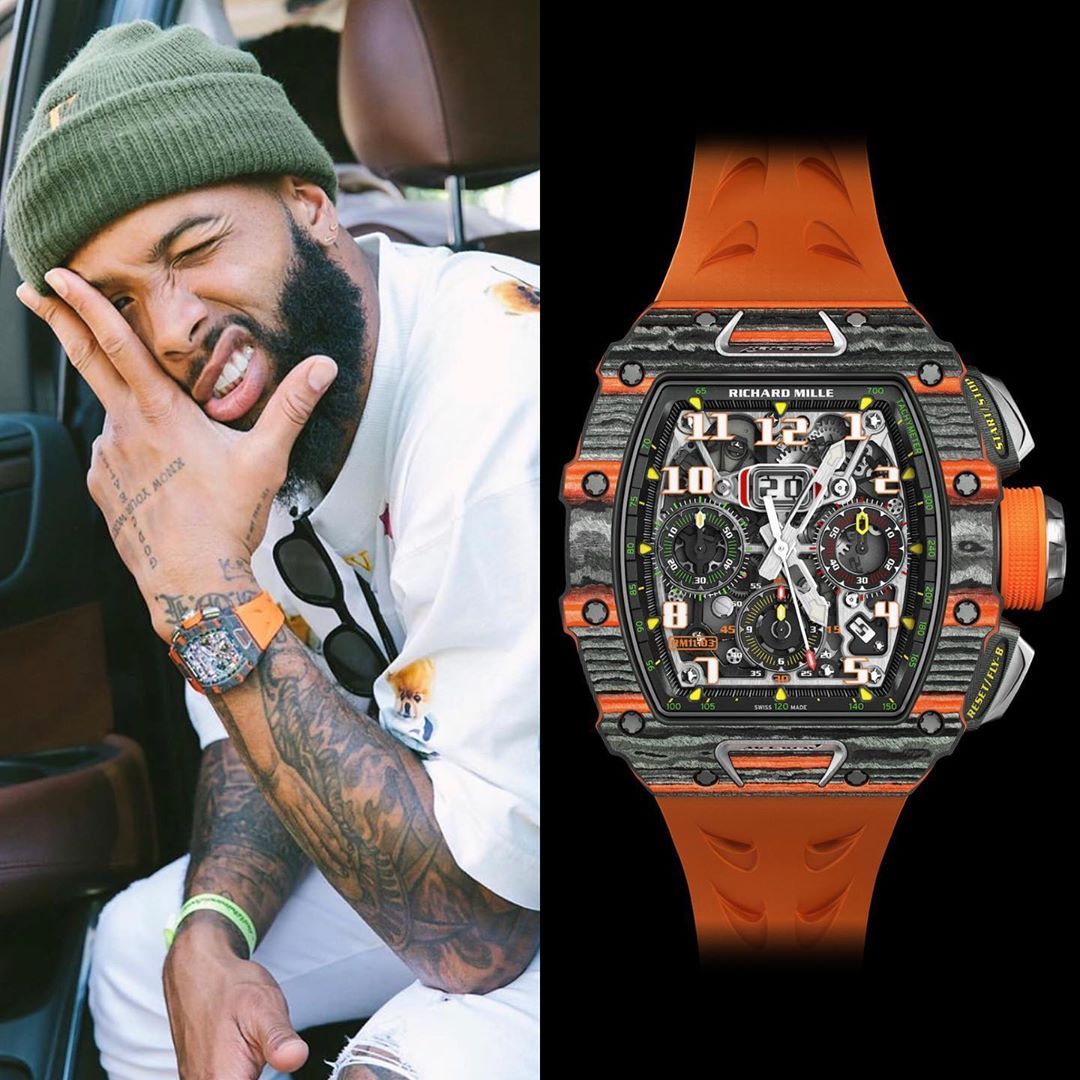 Released in 2016, the RM11-03 took over from the outgoing RM011 to become perhaps one of the most quintessential modern Richard Mille timepieces on the market. Built with the same level of quality, attention to detail, and exuberance that has made Richard Mille what it is today, the RM11-03 has quickly become an icon since its 2016 debut. With its crazy skeletonized dial, incredible RMAC3 movement, and variable geometry winding rotor, the RM11-03 contains the essence of almost every Richard Mille distilled into just a single reference.

Of course, being as iconic as it is for Richard Mille, one of the most exclusive and sought-after brands in watchmaking, it is no surprise that plenty of famous athletes love to wear their RM11-03. From Odell Beckham Jr. to Karim Benzema to Lebron James and James Harden, it is perhaps not only the quintessential Richard Mille, but the quintessential luxury watch for any famous athlete.

From a quintessential offering from Richard Mille to a quintessential offering from Patek Philippe, the Patek Philippe Nautilus is another iconic timepiece that is famous athletes cannot seem to get enough of. Launched in 1976, the Nautilus was certainly not an overnight success, but in the recent ten years has experienced an explosion in popularity that has seen it become one of the most desirable and immediately recognizable timepieces on the market today.

As a result, the Nautilus has experienced market highs that no one thought possible, and as such, its lengthy waiting list, extreme exclusivity, and iconic design have drawn athletes to it as a timepiece to strap on their wrists.

Amongst plenty of celebrities ranging from actors to musicians, the Nautilus can call itself a home in the collections of famous athletes such as footballers Frank Lampard, Robert Lewandowski and Lionel Messi, UFC icon Conor McGregor, and basketballing GOAT Lebron James. Quite the collection he’s got, eh?

Where there is the Patek Philippe Nautilus, there will always be the Audemars Piguet Royal Oak, so it was only natural that it would be next on our list. Launched in 1972 and directly inspiring the Nautilus, the Royal Oak is the OG stainless steel luxury sports watch, and as such, it is not a surprise to find it on the wrists of the world’s best athletes.

With its iconic design, incredible craftsmanship, and intriguing history, the Royal Oak can lay claim to athletes like Steph Curry, Serena Williams, and, you guessed it, Lebron James, who even got to design his own limited edition version of the Royal Oak’s sibling, the Royal Oak Offshore.

Launched in 1997 as the Nautilus’ sportier sibling, much like the aforementioned Royal Oak Offshore to the Royal Oak, the Patek Philippe Aquanaut is a great choice for the world’s athletes. Featuring a tropical composite strap and a slightly rounded design, the Aquanaut takes after the Nautilus in fun and interesting ways.

An “entry-level timepiece” for Patek Philippe, the Aquanaut was created for those who wanted something sportier and a bit more casual than Patek’s typically refined offerings. This allows it to naturally fit into the collections of athletes like soccer players Jesse Lingard, David Alaba, and Lionel Messi, and, no surprise, basketballer Lebron James.